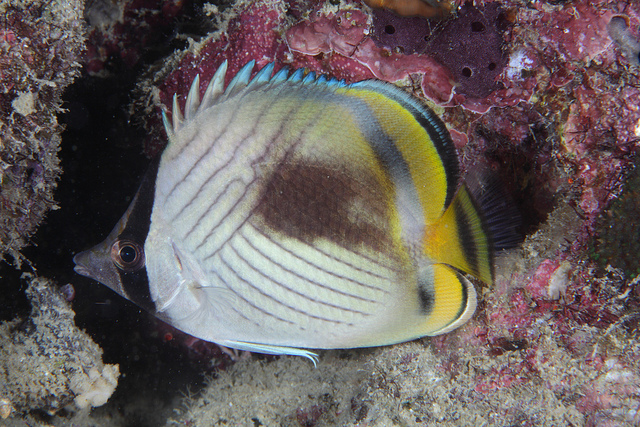 If you have dived the incredibly biodiverse coasts of Negros Island, you have probably seen a vagabond butterflyfish or two: 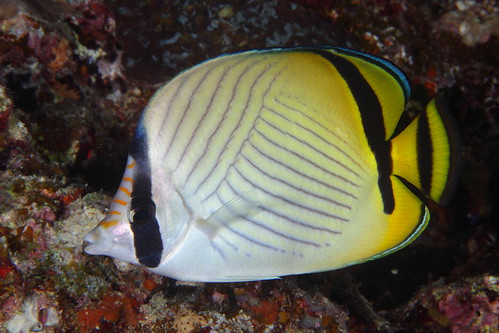 These are pretty fish! They usually swim in (male & female) pairs, and they like most underwater habitats, from coral reefs, to rubble areas to seagrass. They are not too shy, and interesting to watch, when they search the ground for edible worms or crabs. They can maneuver well between table corals and barrel sponges, but are not particularly fast swimmers. Hence marine biologists generally believe that butterflyfish don’t usually cross the open ocean or current-swept coastal areas between reefs, but rather stay on one home reef all of their lifes.

My marine biologist friends at Siliman University in Dumaguete (the city next to Dauin where Salaya is located) recently conducted a really interesting study about the vagabond butterflyfish. The study was led by Dr. Rene Abesamis and ask the following question about the fish:

In Visayan, the language spoken on Negros Island, this means:

“Where are you from?”

To be more precise, they were interested in where the parents of a juvenile fish are from. They answered this question by essentially doing paternity and maternity tests with a large number of juvenile and adult vagabond butterflyfishes. Genetic material, DNA, for these tests was taken from a piece of the fish’s fins. By analyzing some of the more variable parts of a fish’s DNA, the scientists could determine if they had sampled a parent and an offspring fish. Out of a total of 1478 adults and 1978 juvenile fish, they found the parents for 37 individuals.

Most (35) of the juveniles had parents on another reef. Only 2 juvenile fish lived on the same reef as mama and papa vagabond butterflyfish.

It turns out that the offspring ended up on reefs on average 36.5 kilometers away from where the parents live (the mean dispersal distance was 36.5 kilometers). As we recall, these butterflyfishes are not strong swimmers, and don’t leave the patch of reef where they usually live. They settle as larvae, and then stay in place for their whole lives. So, how did all these juvenile fishes end up so far from mom and dad? The ocean currents did it – they transported the fish larvae to their new home reef before they settled down.

A main player in moving fish larva is the “Bohol Jet”, a powerful current running from Bohol island in the east of Negros towards Negros, Siquijor and Cebu: 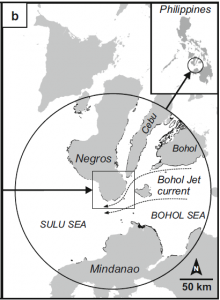 The map below shows all the home-reefs of the parents (beginning of the arrows) and their offspring (arrowheads). The different colors represent parents and offspring inside and outside of marine protected areas (such as the one in front of Salaya):

Many thanks to Dr. Rene Abesamis for the color version of the image! A MPA stands for Marine Protected Area, NTMR means No Take Marine Reserve.

Another interesting result of this study was the estimate that about 7000 vagabond butterflyfish live on the sampled 90 kilometers of coastline of southern Negros.

So, the next time you see a vagabond butterflyfish, think about how far away it could possibly have come from, and that it’s home-reef was decided by a roll of dice by the mighty ocean currents.

Happy diving! If you have any questions about vagabond butterflyfish or other fishes in Dauin, please contact me at klaus@salayabeachhouses.com